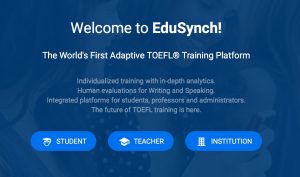 Each year students around the world spend millions of dollars trying to pass English exams. Now there’s a company that is trying to save them some money and make their learning more effective. I spoke to Sean Kilachand from EduSynch.

EduSynch is the world’s first affordable and adaptive training platform focused on English language proficiency exams, starting with the TOEFL.

Who is your ideal customer? 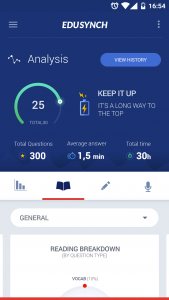 Our ideal customer is any individual looking to take an English language exam to get a better job locally or abroad, attain a degree from an institution of higher learning or looking to challenge themselves and take their English to another level.

To date, we’ve partnered with English language training institutions as well as schools, private companies, and corporations who need an affordable way to understand how proficient their students, teachers and/or employees are in English.  As a B2B focused company, we believe that the best way to scale is to partner with English training institutions, corporations, and other enterprises with the need to assess the English of their students/employees.

Why did you develop EduSynch?

EduSynch began as an assessment tool targeting general education, but after realizing the gap in the English language market in Brazil, the pivot had to be made. There are 19,000 physical English language training institutions in Brazil. After working in the education industry here for a year with another startup, I spent a lot of time learning the intricacies of these English language schools and eventually came to understand that students spend tens of thousands of reais over the course of 5 to 7 years taking classes at theses schools, only to do poorly on their exam. The schools often don’t have the tools necessary to train students for their exams, primarily due to the expensive paper-based materials. By definition, these traditional resources cannot cover the speaking and writing sections – the two most difficult portions of the exam. EduSynch was created to give every student the chance to prepare for their English exam and give them the individualized training they need to perform better on the exam.

How does EduSynch help schools and teachers?

EduSynch provides both teachers and administrators with detailed information about each student to make sure they get the training they need to improve on their weaknesses. With classes of 15 to 20 students, individualization is nearly impossible. EduSynch also provides insights into each student’s general proficiency levels according to the CEFR (Common European Framework) allowing them to assess the efficacy of their classes, the materials they use, and to help better place students. EduSynch also contains an equivalency table to show what each students’ score would be on a host of English exams. While many teachers have to spend hours evaluating students exams, EduSynch can take care of the entire process, including human evaluations for speaking and writing and detailed reports delivered in less than 72 hours. This leaves teachers more time to spend on actual teaching. 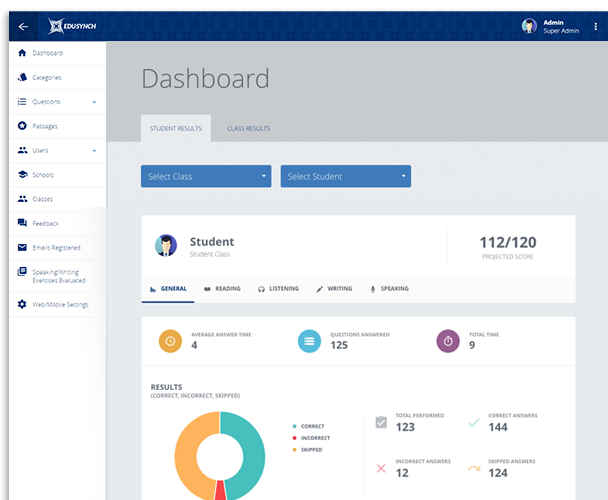 The EduSynch materials are aimed at students taking TOEFL, so what value do they have for other students?

Students who aren’t taking  TOEFL but want to take another English language exam can use the platform to practice the four primary English skills at a high-level.

Using TOEFL as the benchmark, EduSynch not only processes the scores of each student as it relates to the exam, but actually provides detailed feedback based on the intricacies of the exam that can help students in terms of their general English language proficiency.

Could EduSynch be used with lower levels? 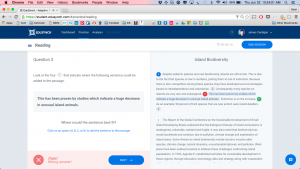 As of right now, EduSynch only has TOEFL iBT/ITP content onboarded, so it caters to students with, typically, a B1 level in English or above. However,  we’ve designed the EduSynch system to be content agnostic, so as we expand we can start catering to lower age groups for these other English exams.

How do you ensure that the grades students achieve in EduSynch really do correlate to the TOEFL test?

Our content is provided by veteran item writers, editors and psychometricians with decades of experience in the business, as well as evaluators who are both BEC and TOEFL certified.

We will be piloting our timed simulation system and adaptive practice platform using various groups of students who have already taken TOEFL as well as a control group, allowing us to actually draw a correlation between the score attained on the EduSynch platform and the official TOEFL exam.

What was the most challenging part of developing EduSynch?

Our development team is from the Northeast of Brazil so for me, learning how to engage in high level development-focused conversations in Portuguese was quite difficult, although they have helped me tremendously along the way. Also, liaising with professors, administrators, and students throughout the country requires a different type of Portuguese mastery, so I was forced to learn quickly (and painfully).

Access to the EduSynch site and app are both free, so how does EduSynch make money? 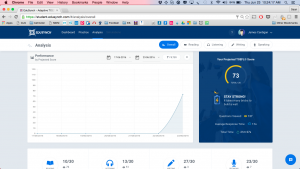 As we have only soft-launched the platform we have left it open for students to practice and for professors to use the teacher platform so that we can improve the product and fix any bugs they find. After piloting the alpha version of the software last year, we determined that students are very unlikely to pay for any practice platform based around reading and listening. The speaking and writing sections provide a much greater challenge. So we plan to sell simulations of speaking and writing exams. In the future, we will probably charge a nominal fee to get full test simulations too so students can gauge their overall score before setting foot in an exam center.

We also plan to charge institutions to use the teacher/administrator platform to monitor their student performance.  This would also allow the institutions to make money, by adding on a few dollars to the simulation packages and embedding this cost in the tuition cost of each student.

What has been your biggest milestone so far?

Moving from development to commercialization. After spending 18 months developing our platform we moved to São Paulo in May to start piloting our software. This transition from being behind the computer to getting pilots up and running has been a huge.

What mistakes have you made and what have you learned from them?

Thomas A. Edison said; “I have not failed. I’ve just found 10,000 ways that won’t work.” I have made tons of mistakes along the journey, the majority of which had to do with how I mounted our team and got together all the pieces of the puzzle we needed to get up to this point. The lessons learned? Hire people smarter than you, for starters. Hire people with complementary skillsets. Hire people who believe in the vision and are willing to work towards it because they believe in it – not because of the paycheck. If it wasn’t for the mis-hires and ‘near death’ experiences, I can say with 100% certainty that EduSynch never would have had the ability to get to this point.

What are your plans for the future development of EduSynch?

Assessments and simulations are merely the beginning. We plan on developing a full fledged platform to provide a highly-structured pedagogical approach to improving scores across a range of English exams. The idea is that in the future, you take a full length simulation and afterwards we provide you with a detailed analysis of what your score would be in the exam and also provide content to help you improve on the questions you got wrong.  In essence, we become a one-stop-shop for students looking to score higher on language exams.

With the increased popularity of digital course materials that track students scores and interactions, some people believe that ‘testing’ will soon become unnecessary. Do you think this is likely?

‘Soon’ is the key word in this sentence. I believe that the proliferation of digital course materials will allow teachers and educators to get a better understanding of their students and pivot away from the traditional model of one-size-fits-all education – something that has plagued the education system since its inception, and something that technology finally lets us overcome. Assessing the strengths and weaknesses of individuals is something that will forever be necessary in education as well as in the professional world, so while ‘testing’ as we currently know it may become obsolete, the need to understand learners’ individual weaknesses will remain paramount for educational institutions to improve learners’ abilities. 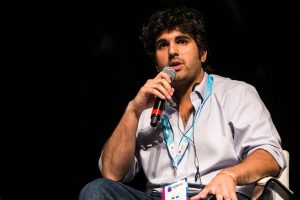 Sean was born and raised in Manhattan, New York City. After graduating from Brandeis University in 2011 with a double major in Economics and Computer Science, he worked on Wall Street for 6 months before landing a job at Forbes Media helping build the company’s famous rich lists (Forbes 400, World Billionaires List, among others.) He relocated to Brazil in January 2013 where he acted as the operations manager of an educational technology startup before starting EduSynch. In his free time, Sean likes to travel, hit the sunny beaches of Rio de Janeiro, and eat mortadella sandwiches. 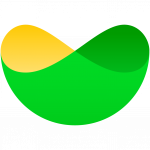