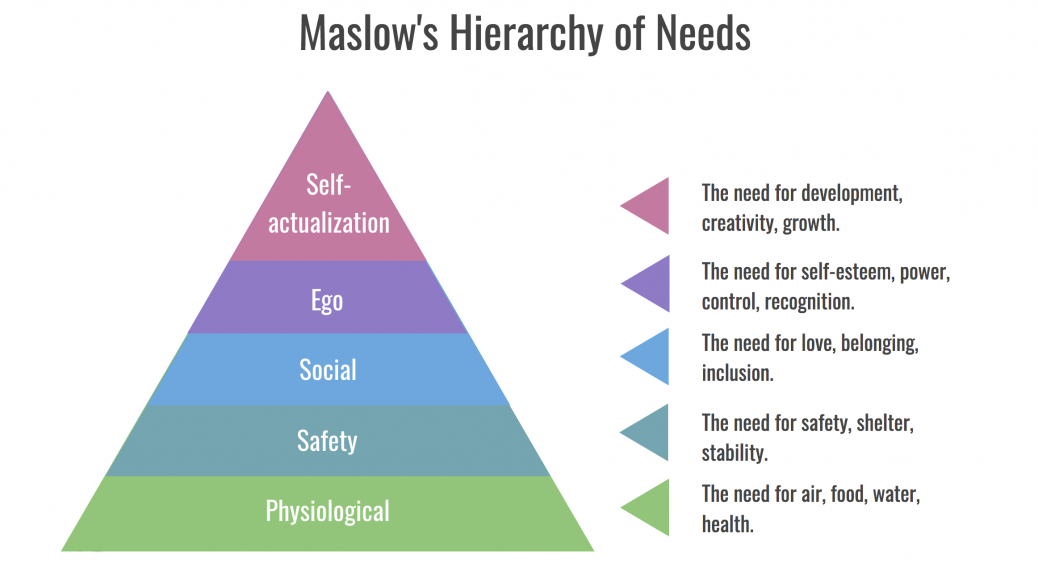 This text has been taken and adapted from my ebook – Digital Tools for Teachers – Trainers’ Edition.

Maslow’s Hierarchy of Needs was originally developed by Abraham Maslow in his 1943 paper ‘A Theory of Human Motivation’. Maslow studied what he called ‘exemplary people’ and looked at how and what motivated them to achieve. His study included Albert Einstein, Jane Addams, Eleanor Roosevelt, and Frederick Douglass. Maslow also studied the healthiest and highest achieving 1% of the college student population.

As a result he developed the hierarchy of needs as an attempt to describe what people need in order to achieve a level of fulfilment from their lives or what Maslow describes as ‘self-actualisation’.
This hierarchy is divided into five levels usually depicted in the form of a pyramid moving from the sections at the bottom, providing for our basic physiological needs of food and shelter, to the level of ‘self-actualisation’ at the top.

This paradigm is a useful one for education because it can help us to focus on what education is really for – helping students to realise their own potential and lead fulfilling lives – rather than achieving what can be rather abstract syllabus goals.

The relevance to educational technology is that it can help us decide which tools we choose to use with our students and how we enable our students to use these tools.

It has become a mantra that pedagogy should lead technology rather than the other way around and this is, to a large extent true. Much early implementation of educational technology did focus on using technology as a form of motivational gimmick rather than because it was the best way to achieve a pedagogical goal, but that is not the only truth.

Putting the technology into the hands of students and helping them to understand how to use it in a way that leads to their own self-actualisation can also be a perfectly legitimate goal in itself. If we do this though, we should be sure that the technology we teach students about has genuine functionality for them outside of the classroom and measuring this against Maslow’s hierarchy is a good way to do this.

You can use this presentation from Digital Tools for Teachers – Trainers’ Edition to train other teachers and encourage them to reflect on their use of technology.

This presentation looks at five stages of becoming a self publisher:

I hope you find it useful.
This presentations was originally designed to be delivered for the IATEFL Materials Writers Special Interest Group.

Becoming Your Own Publisher: From Crowdfunding to Marketing from Nik Peachey

This is the slidedeck from the workshop I delivered for the British Council ‘Technologies and Classrooms’ summer school for teachers in Lithuania in June 2016.

It focuses on a range of tools and resources that teachers can use to support the language development of their younger learners.

There is a strong focus on on technologies that enable students to be creative in their use of language.

I hope you find the slide-deck useful. The images are linked to the sites and examples so please do download it and follow up on some of the links.

This is the slide-deck from my plenary at the 8th TED ELT conference – Surveying the Landscape of CPD at TED – in Afyon – Turkey.

The plenary focuses on how teachers can and should use technological resources to access information and expertise to develop their own teaching.

Tools and Practices for Autonomous Teacher Development from Nik Peachey

I hope you find the slide-deck useful. It has a large number of links to tools and information sources, so please do download it and follow up on some of the links.

This is the slide deck from Nik’s Keynote presentation at the 8th Virtual Round Table Web Conference 6-8 May 2016 (Fri-Sun). It covers his journey through self publishing and has tips advice and links for anyone who wants to publish their own ebook.

Click on the images in the presentation to link through to the resources mentioned.

Empowering Teachers Through Self Publishing from Nik Peachey

Digital Publications for the Digital Classroom